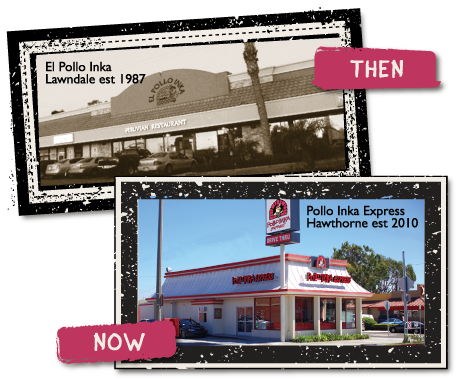 Our story began in Peru in 1971 when the Jaime family decided to immigrate to the United States with little more than a pocket full of dreams and a heart full of wishes. They did not know where they would live or what type of work they would do, but what they did have was a strong belief in the American Dream and a desire to share their love of food and family with the world. They knew that through hard work they would find the freedom and opportunity to pursue their dreams of creating a better life for their family. What began as an overwhelming passion for introducing delicious Peruvian food to friends and neighbors resulted in the creation and birth of El Pollo Inka in Lawndale, California in 1987.

In much the same way that the United States is seen by many as a melting pot of cultures, Peru is a rich mixture of cultures and fusion of international flavors. With the influx of cultures from around the world, a sprinkle of African, a dash of Spanish, a smidge of Italian, and a pinch of Chinese people and ingredients were added to the traditions, flavors, and ingredients of the Inca and other Andean people. This resulted in the creation of a new cuisine that while paying homage to all of its roots, you immediately recognize as something different, something new, something that is simply Spicy, Peruvian, and Delicioso!!!

Pollo Inka Express was opened in 2010 with the goal of serving the same authentic Peruvian food with the same fresh ingredients and spices as El Pollo Inka in a fast casual, quick service setting. You can now enjoy our mouthwatering signature Pollo a la Brasa (Rotisserie Chicken), our best-selling Lomo Saltado, our famous Aji Verde, and many more of your favorites in a “fast food“ restaurant with a Drive Thru. We look forward to awakening your taste buds and spicing up your life!!!